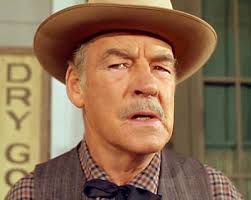 Summary:  Sheriff Roy Coffee has had it with prisoners escaping his jail.  This one isn’t getting off so easily!

Originally posted on FanFiction.net AGES ago, this is a slightly revised edition.  Just a bit of fluff to celebrate the end of summer and all the hijinks and shenanigans that I’m sure you (and our boys) were all involved in.  The story of:

The One Who Wouldn’t Get Away

Roy Coffee sat next to his desk, legs crossed, arms folded over his chest.  His eyes were narrowed and ready, focused on the open door leading to the Virginia City jail cells. This one wouldn’t get away.

He shifted his weight slightly and crossed his legs the other way. Raising his head he looked at his prisoner from over the tip of his nose. He thought back to his morning rounds before he’d caught up with this violator of the law. In the streets of Virginia City, the idle chatter and gossip of the town folk had worked its way to his ears.

“That Roy Coffee must be getting old. Some prisoner caught him off guard just last week.”

“Did ya hear about that Grayson feller? Gave ole Sheriff Coffee the slip!”

“That Poor Sheriff’s been working so hard, I think he’s getting a little too old for the job.”

He laughed triumphantly to himself, a sly smile slid onto his face. He couldn’t wait to hear the talk in the morning. This one wasn’t going anywhere.  ‘Getting too old, my foot!’

“Roy?” The voice from behind the bars brought the Sheriff out of his thoughts. “Roy, please!  You know I’m good for the bail. See?  It’s right here in my pocket!”

“No siree… I don’t think so.  After the carryin’ on you did to get yourself in here, we’re gonna wait here ’till someone responsible comes to fetch you!”

The prisoner rolled his eyes and crossed his own arms over his chest. With an annoyed huff he sat on the small cot, shooting his own glare at his captor.

A huff of air signaled a change of tactics.  “Hey, Roy?” His prisoner tipped his hat further back on his head, letting a stray curl fall down his forehead. “What do you say to a game of checkers, eh?  You can be black this time…”

Roy smiled. “Hey, that sounds like a good ide-” The Sheriff stopped for a moment, his mind working out the suggestion. “Oh, no… No, you get that notion out of your head! Think you’re gonna pull the wool over my eyes do you? Ha! Not this time! That’s how the last one escaped on me!”

“Roy, come on!” He roared, jumping up from his cot, throwing his arms in the air. “I’m not going anywhere!”

The prisoner mumbled something incoherent, but with a definite edge of annoyance. He refolded his arms and sat back on his perch. He rolled his eyes again with a heaving sigh before continuing to shoot daggers in the Sheriff’s direction.

Just then the door opened and Adam Cartwright walked through. He extended his hand to the Sheriff with a smile. “You, ah… Wanted to see me, Roy?”

“There you are!” The Lawman returned the greeting. “We’ve been waiting for you, haven’t we?”

“I already told you, because it’s procedure! Now that Adam’s here I’ll get you out right quick.  As soon as he pays your bail.  I just didn’t wanna take any chances on you escaping on me.”

“Escaping!” The captive Cartwright yelled. “Of all the –”

“Ah, how much do we owe you, Sheriff?” Adam interrupted to the tirade.

“Two dollars!” Both Adam and Roy turned away from the muttered oaths coming from inside the cell.

“Till we get the bill from the Silver Dollar, that is.” Roy added over the noise. “Don’t know how much that’s gonna be, but I suspect this one’s gonna have to pay that hisself.”

Adam dug into his pocket, producing his wallet. He took his time extracting the said amount and handing it to Roy, enjoying the sight of Roy’s prisoner squirming.

“Thank you for comin’ to fetch him, Adam.” Roy picked up his keys and the gun belt from his desk and casually walked over to the cell. With a small flick of his wrist, the door swung open.

“Here you are.” He handed the gun belt over with a smirk.  “I don’t want to hear of no more trouble from you.  Got it, Boy?”

The scowl on the owner’s face deepened as he snatched his belt. He threw it around his hips and rammed the buckle through the hole.

“Well, come along.” Adam motioned for his wayward relative to walk out with a grand arm gesture. “Thanks, Roy.” Adam tipped his hat and walked out himself.

Ben Cartwright stood on the steps to the jail. He closed his eyes, a deep breath of fresh air helped to smooth his scowling features. He looked into the faces of each of his boys. “Strange,” He thought briefly. If he didn’t know his boys so well, he’d think they were amused by his predicament. He quirked an eyebrow. “Maybe it’s because I do know them so well.” He stepped down off the walkway and over to his horse, gathering the reins.

“Gee, Pa.  Haven’t you been told to behave yourself when you’re in town?” Joe shook his head in mock disbelief.

Ben narrowed his eyes at his chuckling sons.  Joseph and Hoss were each sporting a face splitting grin.  Adam had the decency to hide his behind his hand.

At least Buck wasn’t laughing about this!

“Someone responsible, he says.” Ben muttered. How embarrassing to have his boys fetch him from the jailhouse. It was just a little misunderstanding!  He gathered his reins from Hoss’s hand with a little more force than was necessary.  He rammed his foot into the stirrup and mounted his trusty steed.

“Boys,” Ben spoke. “No one votes for Roy Coffee next election, do I make myself clear? No one!”

Professionally, I'm a music teacher in search of her forever classroom (silly economy...) and currently teach in a special needs preschool. I've also been accused of being a crazy cat lady... My Kitty-Children and I have NO idea what those people are talking about.