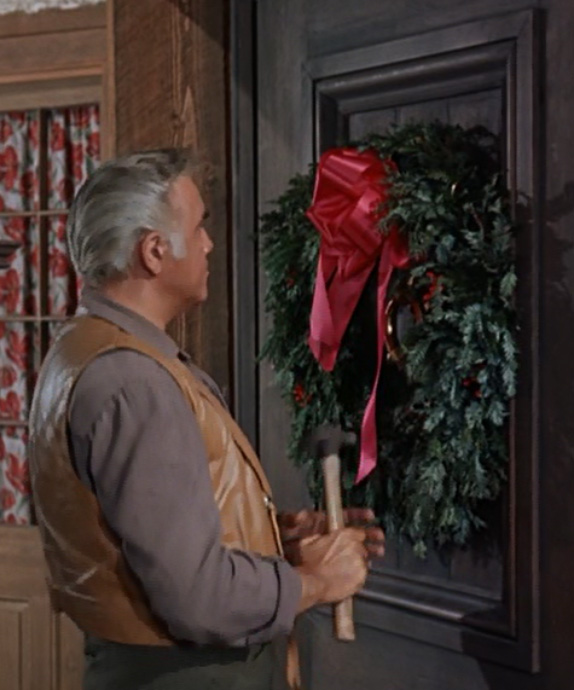 Summary:  Ben Recalls each of his sons’ first Christmas

That first Christmas with Adam had been a hard one, Ben recalled. He had left Boston in a determined frame of mind, missing Elizabeth but eager to follow his dream. Harsh reality had set in by December. That Christmas Eve, in a dismal boarding house, the best he could afford, Ben was feeling depressed and a little fearful. Mrs Jackson, the wet nurse he had employed for the infant Adam was about to leave them and return to Boston. The winter was harsh and money was short. How he would manage, alone with a small baby, he just didn’t know.

Despite all his worries, Ben still found time to read the Christmas story that night. Speaking in low tones, so as not to wake his sleeping child, he told of the miracle of Christ’s birth. The thought of the infant Jesus sleeping soundly in the manger, much as his baby son slept now, brought a smile to Ben’s lips. Then, just as the story ended, Adam’s eyes flickered open and he favoured his father with a wide grin and a sleepy gurgle. Ben felt his heart swell with love at this first smile and suddenly, Christmas seemed worth celebrating again.

Hoss’ first Christmas was no less hard. Travelling west with the wagon train and having suffered the grief of the loss of Inger, Ben was in no mood for festivities. Adam however, despite his sadness at his step-mother’s death, was still excited at the prospect of Christmas and, for the child’s sake, Ben made an effort to join in with the celebrations. For some weeks the men of the wagon train had been whittling small toys while the women sewed patchwork dolls from old blankets and clothing so every child would have a gift.

Christmas Eve found the train halted on the prairie. Beneath a black velvet sky, studded with stars, the people from the wagons came together to eat and exchange gifts. As the evening wore on, one of the men reached for his guitar and the songs of praise rang out. Adam sat cuddling his baby brother on his lap, softly singing, his lips close to the infant’s ear as though the words were solely for Hoss. The sight of the two boys brought a smile to Ben’s lips and a feeling of hope to his heart. Putting his arms around his sons, he raised his own voice in celebration of Christmas.

By the time Joe was born, life was much more settled. Joe’s first Christmas had been a happy one. There had been a tree, many presents and Marie, excited as any child, presiding over a table groaning with food. How joyful he had been, as he read the Christmas story that night. His baby son on his lap, his wife close beside him, Adam and Hoss sitting at his feet, their eyes alight with wonder. He had felt truly blessed, his family growing, a wife he loved and a safe and happy home.

And now – Ben gazed around him at the blazing fire on the hearth, the pine tree by the stairs, festooned with decorations and the table set for a festive lunch. Smiling, he looked down at the tiny child in his arms. Another baby’s first Christmas. His heart was full of pride as he handed his first grandson over to his father’s waiting arms. To see his son with a child of his own was the best Christmas present Ben could have wished for. A magical Christmas indeed.

And I’ll leave you to decide which son presented Ben with a grandchild. Merry Christmas!

On the 24th December 2018 the Bonanza Universe lost one of our dear friends and writers.  Kathleen Pitts (KateP) was a prolific writer of Bonanza fan fiction, a familiar name throughout most of the Bonanza forums where her stories are posted, read, and enjoyed by so many for so long.

Born in Bristol, England, UK Kate was married with two children and grandchildren.   She was a founding member of Bonanzabrits and eventually became the Moderator for that forum where she kindly led many to write and enjoy everything Bonanza for many years.   She was kind, patient, and always encouraging to fans old and new.

Sadly three years ago she retired from Brits and from writing when she was diagnosed with cancer.  We are more than grateful that so many still have the advantage and pleasure of reading her stories here on Brand, as well as other sites for Bonanza fanfiction.   KateP will live on through her stories, and from the many friends she made over the years.

8 thoughts on “A Child’s First Christmas (by KateP)”