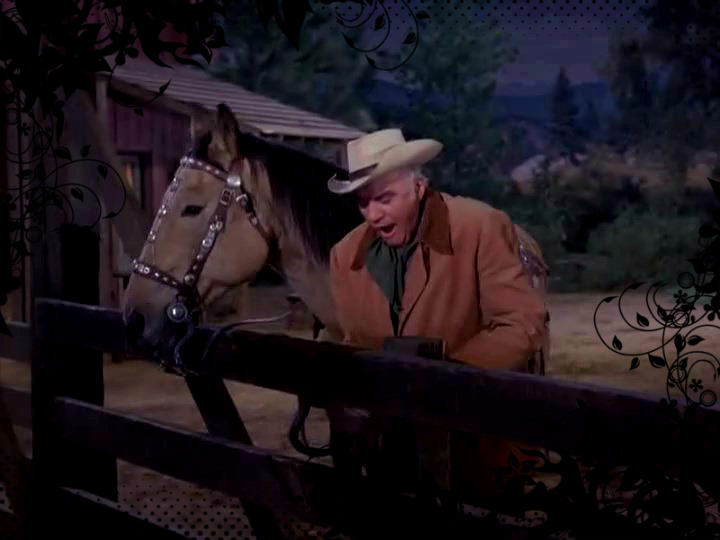 SUMMARY:  Father and son have a quiet talk in a special place and find that the past left an impact that affects decisions that have to be made.

Looking out over the lake where the moon was sending a broad ray of light expanding as it did so making the whole lake sparkle, Adam Cartwright was a bit surprised to hear his father’s footsteps coming up behind him. He had heard a horse but had expected a brother not his father although he was sure it was him. His father was a cautious man and coughed loudly twice well before approaching his son not wanting to startle him in the dark. He knew the sound of that cough well enough by this time. Knowing the way, the older man could have walked there silently but clearly didn’t wish to take the chance the surprise could lead to a deadly reaction by his son.

“Pa, after all these years of you telling me how dangerous it is to take rides in the dark, you ride out here to see me? You must have known I’d be home soon.”

“I did, but I was concerned about what you might have on your mind. I thought it would be best if we had a chance to talk. I brought your coat.”

Hearing the hint of humor in Adam’s voice, Ben knew the worst of his concerns could be laid to rest. “No, I have a canteen of coffee with a bit of brandy in it and two tin cups. If you insist on being out in the cool night air, I decided you ought to be warm at least.”

“Grain for the horses?”

“I didn’t expect that we would be here that long.”

“We won’t. I had some doubts about my conversation this afternoon and whether I should have said what I did.”

“I guessed as much. Your brother told me about the things you told him or at least a summary of the conversation. I am guessing, but I would think you are probably feeling that you are responsible for whatever decision he makes, and you’re worried about what that decision will be.”

“Not as much as you think. He trusts all of us because we’ve earned that trust. Now he told me there was a story about some lilies. I don’t think I know that one.”

There was a slight catch in Adam’s voice when he told his father the source of that story. “It was that last good summer with Marie.”

Ben knew what he meant. It was the summer before her accident. She and Adam had learned to love each other, and Little Joe was the age where he adored his oldest brother. Adam frequently had to go to Marie for help in handling the youngster’s constant attention. She was the buffer Adam needed to handle the responsibilities of the ranch and yet be the protective older brother he wanted to be. A strong bond was forged between them leading to a number of mother and son talks. Ben envied those as Adam opened up to his stepmother in ways he rarely did with his father. Because he wanted his father to be proud of him, he was reluctant to ever admit any doubts or worries to him preferring to handle things on his own. Marie however could be that sympathetic adult he needed when his confidence wavered.

“Lilies had something to do with you going away to college and then again later?”

Even after all the years, the memory of his third mother was strong. She had made quite an impression on him as had Inger. He would never forget them. “Yes, you know how Marie liked her flowers and pampered those roses and the few lilies she managed to get to grow here. Many times we were in the garden when we found time to talk. We were enjoying looking at her lilies one day when she told me that I was like one of the lilies. I asked her what she meant. She said that her lilies all bloomed with the blossoms hanging down very gracefully and blowing in the wind. But every now and then, there would be one that went against the grain and just had to be different. It would proudly point up at the sun and strongly resist every urge to do what others had done. She said she called those lilies stargazers. Day or night, they looked to the skies seeing so much more than the others saw. She said I was a stargazer and would never be happy with just the Ponderosa. I didn’t fit in like the others did. That’s when she first brought up the idea of me going to school and of travel. She said if I didn’t, then someday, I would be so unhappy, I would leave and never come back.”

“That almost happened, didn’t it?”

“Why did you come back?”

Years earlier, Ben had felt his heart breaking when Adam said he was leaving and wasn’t sure if he would ever be back. After he heard all that Adam thought he wanted to see and perhaps do, Ben knew he might never see his son again. They had talked about Adam’s plans. Ben had asked if he had enough resources to do all he wanted to do, and then he had given him his blessing and helped him to explain it all to his brothers. It had been a time of great sadness, but they had to let Adam have his freedom if that was what he wanted. To hear now that was the reason he came back almost made Ben cry.

“Knowing I was free, made it so much easier to return. You especially lightened my burden of guilt when I wanted to go. It was a terribly difficult time, but you never threw out any recriminations nor laid any more guilt on me than I already felt.”

“Will you leave again?”

“He is about where I was then when Marie talked to me about leaving. I was scared to leave and yet all I thought about was leaving.”

“And the second time?”

“I worried about leaving and the effect it would have especially on you, and yet all I thought about was leaving. He’s probably feeling some of those things too. Worried about how it will affect you after all you’ve done for him, and yet, he wants things he can’t get here.”

“So what you’re telling me is to let him go, even encourage him to go, because that is what will bring him back to me?” Despite the serious nature of their conversation, Ben heard the rumble of Adam’s chuckle.

“Pa, sometimes when I was younger, I wondered about your intelligence, but as I get older, you get smarter and smarter.”

“And you have never had a shortage of smart remarks.”

There was no resisting it. Ben had to chuckle too. Pouring the last of the brandy-laced coffee into their tin cups, he looked over the lake lit with moonlight and shimmering with it against the dark shadows of the mountains on the other side. Taking in a deep breath of the clean mountain air, he leaned back and looked up at the stars.

“I guess I was a stargazer too until I put my roots here.” Pausing only briefly to get his thoughts organized, he posed the most serious question. “So you think Jamie will come back here when he’s done with school?”

“He’s already thinking of working in Carson City. He told me the state capital would have more demand for someone with that education than Virginia City would. Apparently he’s looked over the Ponderosa land in that direction and thinks there are a number of places a man could put a house.”

“You could have told me that earlier.”

“I could have. It didn’t come up naturally in the conversation until now though.”

“You can be quite exasperating.” Ben knew there would be a cheeky grin if he could see his son’s face in the dark. Some things never changed.

“Still so sure you’re glad I came back home.”

“Absolutely. Now let’s get back to the house. You know how your other two brothers worry about us. This time, you can help me explain why they have to let another brother leave.”

With one last look at the moonlight and the stars reflected in the waters of the lake, the two men got their horses to go home. As they rode back, Ben wondered at his sons and how they always went to the waters of the lake when they were troubled. It was as if the fluid nature of the lake helped them get their thoughts in order. He was glad it was there. It helped when you were looking for a troubled man. Two had gone there that day. First it was Jamie and then Adam. He guessed it wouldn’t be the last time. Hoss and Joe would likely go there to get their minds clear on this idea that their two brothers were wanderers. It was much easier than picturing them as lilies looking at the sky. Ben smiled when he thought that.

Adam noticed, but when Ben hid his smile as soon as his son saw it was detected, Adam was smart enough not to ask why. He had been in enough discussions already for one day. He did think that perhaps he would see if he could get some lilies to grow in the garden and perhaps there at the lake at Marie’s final resting place. Maybe there might be a stargazer or two among them.

16 thoughts on “Stargazer (by BettyHT)”