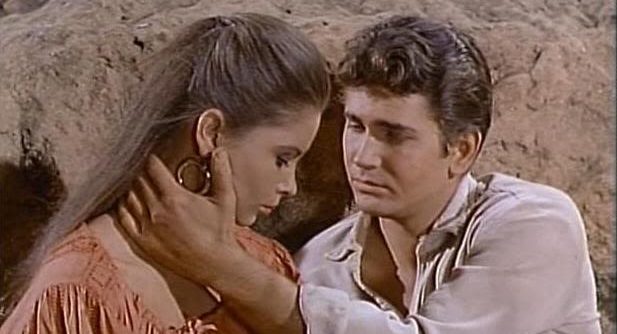 Disclaimer: I don’t own the Cartwrights or Bonanza. No copyright infringement is intended against Anthony Lawrence’s script. Original plot is property of the author. This story is for entertainment and no money was made from it.

Reviews are on the last page.

Fish Out of Water

Joe muttered to himself as he kept an eye out for livestock stranded on the riverbank. He’d lost the solemn ceremony of the matchstick this time. Adam was supposed to get the short one. I’m gonna wallop Hoss when I get home.Ever since Adam fell in the river two years ago while rescuing a calf, he managed to invent ever more creative excuses for why this particular chore should fall to someone else. A few of Adam’s excuses flitted through Joe’s head: I get the sniffles thinking about that cold, wet ride down the river; I saw Laura in town and my bad back flared up; Jigger Thurman asked me to write a new song for his bull.From the corner of his eye, Joe caught a glimpse of bright orange in the river. He pulled Cochise up and placed his hand over the brim of his hat. Whatever it was had disappeared. Standing in the stirrups, Joe craned his neck and scanned the swift-flowing water. Bright orange bobbed to the surface and again went under.“Giddup, Cooch! Someone’s in trouble!”Obeying his rider’s urgency, Cochise loped down the well-worn bluff trail. Stopping at the river’s edge, Joe plucked the rope from his saddle horn and encouraged Cochise to trot along the bank. Joe watched the frothy water, anxious for the orange-clad person to appear again. The river boiled with white-caps and gained speed where it funneled through boulders. Orange shot to the surface for a brief moment before smashing into a rock. Joe gasped and prayed for the strength to rescue the person before the river dashed them to pieces. He nudged Cochise forward and hoped to make it to a point downriver first. On his way, he caught several more glimpses of orange fabric from the corner of his eye.He jumped off his horse and looped the end of the rope around the saddle horn. “Stay,” he ordered the paint. A buzzing filled the air as Joe swung the lasso, ready to let it fly when the person next appeared. Like a cork, the river’s victim popped to the surface. Joe let the rope fly, confident in his ability to snare his target after years of practicing on calves, dogs, cats, and girls. There’d been one or two times he’d lassoed a bird flying low to the ground.The end of the rope looped over the person’s wrist and Joe was pulled to the edge of the river by the river’s momentum. He held tight with his hands and swung his legs over the taut line. “Pull!” he yelled at his horse.Cochise flicked his tail in response.“Pull or Hoss will ride you for a week!”The paint snorted but obediently backed away up the hillside.When solid ground was beneath Joe, he dropped his legs from their perch but kept one hand on the rope, anxiously waiting for the person to reach the river’s edge.Long brown hair, floating like strings of seaweed, reached the sandy shore first. Connected to the hair was a young woman. Her eyes were closed and her face was serene.Joe put his hat over his heart and whispered a prayer for the repose of the woman’s soul.He knelt down to retrieve his rope but fell back on his butt in fright. The woman had opened her eyes.Clutching her hand, Joe pulled her out of the water. Gasping and sputtering, she sent droplets of water flying in a fine mist, creating little rainbows. Her clothes were plastered to her body, enhancing her curvaceous figure. In a sudden fit of modesty, Joe wriggled out of his jacket and draped it around the young woman’s shoulders. She took in her surroundings, breathing through her open mouth. As he removed the loop from her wrist, he said, “I’m Joe Cartwright of the Ponderosa, rescuer of fair maidens.” He placed a finger under her chin and gently turned her face to his. “What happened?”Fixing him with her limpid gaze, she said, “I swim as a fish, with the current, to where the river takes me.”Joe cocked an eyebrow. “What’s your name?”“Name?”“What are you called?”She smiled, revealing a shallow dimple. “I am called Tirza.”“Is there someplace I should take you?”Tirza turned to face the river and said, “I seek the shallow pools, where the water is calm. There it is safe.”Joe cleared his throat. “I’m going to take you to the Ponderosa. After you get a hot bath, you can tell my family where you’re from and who your people are.”She quickly turned on her toes and placed her hands on Joe’s face. “I will go with you, Joe Cartwright. Where there’s water, there is home.”He placed his hands around her small waist and easily lifted her up onto Cochise. After she was settled, he swung up behind her. Cochise snorted at the extra weight but soon found his stride.Tirza, sitting sideways, held tight to Joe’s waist and pressed her cheek against his shoulder.

*On a far corner of the Ponderosa, Adam and Hoss smelled death. They dismounted and cautiously approached a clearing. Smoke rose from the remains of wagons positioned in a circle. Vultures feasted on bodies riddled with arrows.Hoss swallowed hard and said, “No wonder that gal thinks she’s a fish.”“She must be the sole survivor,” Adam said softly. “The river must have been the safest place to hide. Or she jumped in to get away.”Hoss pulled his bandana from his pocket and held it up to his nose before entering the grim circle. He studied the shaft of an arrow. “These are Washoe.”Adam nervously looked around and walked to the far side of the camp. Symbols were carved into the rock face. “Let’s go, Hoss. Now.”“But, Adam, we should bury these folks.”“No. This is sacred ground. The Washoe won’t appreciate the contamination. We’ll have to leave the bodies for the vultures.” He holstered his pistol and said, “Let’s get home.”Hoss gulped and obeyed his brother.

*Arriving in town, Joe helped Tirza out of the buggy. He proudly noted the envious glances of other young men. “You wait right here. I’m going in the Bucket of Blood for a minute.”Tirza nodded.As she waited, she noted the shops across the street. Gaudy cloth in one window caught her eye. She stepped into the street, drawn as a moth to a flame.The stagecoach barreled into town and the driver tugged on the reins to slow the horses. Joe stepped into the bright sunlight as Tirza was run down.“No!” he screamed as the driver yelled, “Whoa!”Tirza’s broken body was trapped under one wheel. Joe, on his knees, gently stroked her hand.The stage driver jumped down and said, “I tried to miss her. Really, I did. I sure am sorry, Little Joe.” He opened the door to assist his passengers out.Joe remained on his knees, hoping by some miracle Tirza was alive.From the corner of his eye, Joe saw the breeze flutter a deep purple skirt. He looked first at the hem then his eyes traveled up to the most beautiful pair of blue eyes he’d ever seen. The young lady looked down as she opened her parasol. “Where can a lady find accommodation in this town?”Joe continued to stare.The lady cleared her throat and repeated her question.Forgetting Tirza, Joe was bewitched by the young lady’s British accent. He removed his hat and found his voice. What’s your name?”“Doreen.”He said her name and smiled. “My Pa would tan my hide if he knew a lady as pretty as you arrived in Virginia City without a place to stay. It’d be my pleasure to escort you to my family’s ranch, the Ponderosa.”“Ranch?” she asked.“We have a huge spread.” He took her valise from the driver and then steered her to the buggy. “We have plenty of room for guests, so don’t you worry about imposing.”“I really shouldn’t,” she said, looking back over her shoulder, searching for a hotel or boarding house.“My Pa won’t take no for an answer.”She stopped and placed a palm firmly against his chest. “I don’t even know your name.”“Cartwright, Joe Cartwright,” he said as he tipped his hat. “Welcome to Virginia City.”Doreen returned his smile. Joe assisted her into the buggy and bumped into Roy Coffee as he made his way to the other side.“What about that girl?” Roy asked, hitching a thumb at the corpse trapped under the stagecoach.“See she gets a decent burial,” said Joe in a low voice and close to the sheriff’s ear. “Send the bill to Pa.”Roy watched in astonishment as Joe sprang into the buggy and set off down the road. “Wait ‘til you see our place,” said Joe to his new companion. “All the fresh air you can breathe, great food, and soft beds. You’ll love it.”“I’m sure I will,” she replied as she settled in for the ride.Joe hummed a merry tune, his heart beating “Doreen” in time with the buggy’s wheels.The EndSeptember 2012

I'm a historical archaeologist who loves westerns and Bonanza is my favorite. I wrote my first Bonanza story in 2006 and the plot bunnies are still hopping. The majority of my stories include the entire family and many are prequels set during the period when Ben and Marie were married.

4 thoughts on “Fish Out of Water (by Patina)”