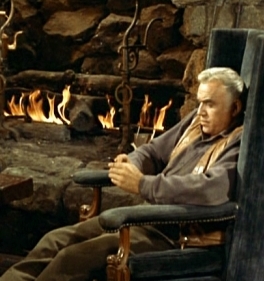 Summary:  Like a stitch in time, Ben remembers a few special moments through the years.

The house was warm, welcoming. A fire glowed and candles burned in their sconces sending halo’s of golden light reflected back from the picture of the ship that was hanging above the mantle. An oil lamp shone its flickering light from the center of the table at which they had sat earlier to share their supper.

The older man had left the house a little earlier, choosing to spend the last hours of the day with his drinking companions in the tavern where they could boast about battles fought against wild seas, and delve into their memories for even longer tales with which to regale each other.

She sat with her dark head bowed over the linen, and her fingers darted in and out as she drew the thread on the needle through the torn shirt. Sensing his eyes upon her, she glanced up and smiled. A smile that told him she loved him, that there were no words to describe that love. The look in her eyes was more than sufficient, and for some seconds their eyes were locked in an intimacy too private and too intense for any intrusion.

“You were down at the harbor for a long time today,” she said quietly, bending once more to her task.

“How would you know that? Have you been downstairs peeking through the window?” He leaned towards the fire and lit a taper which he took to his pipe.

“I could smell the sea on your shirt and the smell of tobacco – it lingers.” She held the shirt up and examined the rent. Then she turned twinkling eyes to him. “What were you thinking about?”

“Oh, daydreaming. I was thinking about where we will live, one day, you, our son, perhaps another son.” He glanced over at her and smiled as she put a hand unconsciously onto the mound of her body where the infant lay concealed. “And what it would be like.”

She smiled a faint smile; beneath her hand the infant kicked, and she looked up at her husband who had taken the chair opposite her, a gentle smile on his handsome face and a look of pride in his dark eyes.

“It will be a wonderful home, Ben, and there will be trees, and mountains, and a river running right by our house. Our son will be handsome, just like his father, and tall.” She paused, then lowered her head; perhaps it was not wise to say too much about her dreams, and hopes for the future. Sometimes, it was almost like tempting fate.

She said no more, but continued to ply her needle. As he watched her, he felt his heart tighten, as though his love for her were like the thread she was using on the torn shirt but that instead she was sewing her heart to his, an invisible strand never to be broken.

“What have you got there?” he leaned over his wife’s shoulder as she pulled out a shirt and shook it loose of its creases.

She was sitting among the grasses, and the wild flowers were nodding over at her; he was sitting by her side. They sat very close, close enough for him to see the fine hairs on her cheeks, as soft as the down on the skin of a peach. The sun made her golden hair shimmer like a halo about her head.

“An old shirt of yours, Ben. See, it has been torn already.” She showed him the neatly sewn rent in the shirt and he remembered how Elizabeth had sat there sewing with her needle, beside the fire at their home in New England, “Adam needs a new shirt now; he is growing big. Perhaps now is the time to cut this old shirt up for it to make a new one for him, yes?”

He smiled softly, his eyes darker. He took the shirt gently from her and held it to his face. That invisible thread from long ago pulled at his heart. Inger put a hand to his cheek and smiled gently. “Not this shirt then; another perhaps?”

He sat by the fire and watched his wife reading. It was a comfortable hour, with the children in bed — all except Adam who sat just a little away from them, turned to one side, his eyes scanning the words of a book. She looked up at him, smiled and he smiled back at her and nodded, waiting for her to speak.

“Ben, I was clearing up some things and found this old shirt.” From the basket of clothing, piled neatly by her side, she showed him the shirt. “I was wondering whether to cut it up for polishing rags. Hop Sing needed …” She paused as he reached out and took it and looked at it. “It’s just an old shirt, Ben, it was torn once. Look, someone has sewed it already.”

Yes, of course someone had sewn it already, he thought, someone with dark hair and twinkling eyes who could smell the sea and understood my dreams. His heart ached as the invisible thread twitched so, and he looked over at the boy reading his book and remembered how she, Elizabeth, had talked about her son as she had sat and sewn this shirt.

“Hop Sing?” He peered into the kitchen and saw the rags piled on the table and shook his head as his eyes fell upon the neatly sewn tear. He walked over and picked up the remnant of an old torn shirt, “My old shirt.” he murmured.

Yes, all gone now. He sighed and put it back on the pile, turned away and walked to the window. Outside it was snowing and he could not see the ocean nor smell it from where he stood. But just for an instant the fresh salt tang had touched his nostrils along with the perfume she had worn that evening as she sat sewing his torn shirt and tied his heart to hers.