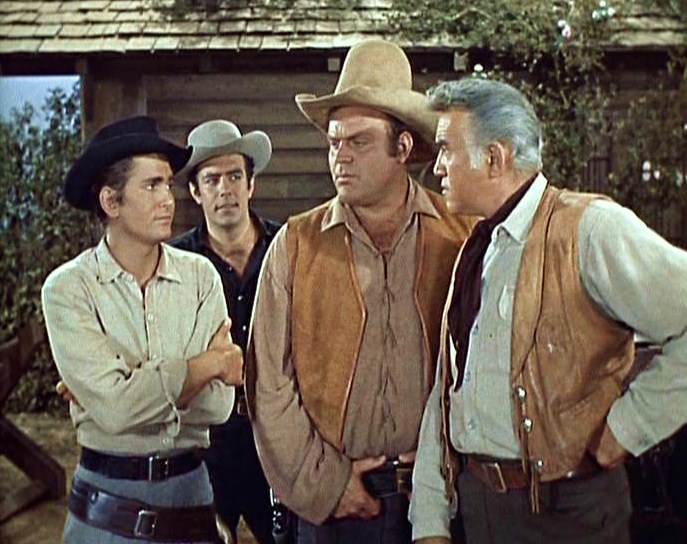 SUMMARY:  Little Joe finishes a dime novel, and in his enthusiasm to share it with his family, he stirs a philosophical discussion and reflection on a deep moral issue.

Coming down the stairs three steps at a time, it was clear Little Joe was excited when he finished his latest book. Because he had enjoyed it so much and because the story line was so much better than his usual dime novel, he thought he would try to get his father and brothers to read it.

“This one is a really good one. It’s about a lawyer who goes up against a gunman and wins. The people in the town are so impressed with this lawyer’s courage that they elect him to the Senate. Once he gets to Washington, he does a whole bunch of good things for the state and for the country too. He’s a really good guy.”

“Now, why would I want to read the book, Little Joe? You told me the whole plot and the ending.” His father was not convinced.

“No, I really didn’t. Most of the book is about what led up to that fight and how he finally walked out there to face him. It’s so real, it’s like being there. Whoever wrote it must know a lot about the west because he doesn’t sugarcoat anything. When that lawyer walked out there, he said he had sweat running down his neck and down his back, and well, I don’t want to give away any more, but he was scared.”

Slightly interested, Adam had a question. “What’s the title of the book?”

Quiet until then, Hoss stated a simple fact. “I met the man who killed Liberty Valance.”

Now that got Little Joe’s attention. “You met the man who got to be Senator? When? You never told us a story like that. I never knew you met anybody that important.”

“Nope, I never met no senator. What I said was I met the man who killed Liberty Valance. That is, I met the man who really shot Liberty. It was when I rode in that Army patrol scouting with Sergeant Pepper. We met up with an old rancher along the way who helped us out. We got so far from here none of us knew the land at all. He knew that territory out there like the back of his hand and rode with us for a bit. At night, around the campfire, he talked some. One night on the way back when we was all relaxing some, he told the story you got in that book, but he told it different.”

“Aw, c’mon, Hoss, if he shot Liberty Valance, he would have been the hero not the guy they elected Senator.”

“No, not the way he said he did it. He knew how fast Liberty was and how many men he’d killed. He knew no good man could beat him. Liberty had everybody there scared to death of him and nothing right could happen while that man was alive. This here rancher went in an alley and shot Liberty Valance when he faced off against your hero there. You know how wild gunfights can be. Bullets are flying everywhere. He fired right after the first shot. Then he left and never went back there. Spent his life away from towns and people.”

Little Joe was shocked. “He murdered him?”

Hoss nodded accepting that was how he saw it too. “Some would see it that way.”

Ben saw it that way. “It was illegal and immoral no matter what he was trying to accomplish.”

Adam was more philosophical about it. “A lot of good came from that one bad act. How many more would have been hurt and how many would not have been helped if Liberty had been allowed to continue?”

“That’s not the point, son. There are rules, and mankind lives under those rules because we do better, all of us, when rules are followed. You can’t set aside the rules because you think you have a good reason. If we did that, we would have chaos. Every man would be able to find a reason for setting aside any rule he saw fit to oppose.”

Little Joe had a question too. “Pa, what would you do if it was one of us facing Liberty Valance in that street?”

Ben didn’t want to fall into the trap of that question, so he did what Adam and sometimes Joe did so well. He evaded it. “There’s no point to that kind of discussion. We have law here. No man like Liberty Valance would be allowed to terrorize the good people of our community. Therefore, thank the Lord, I would not have to ever see one of you face a man like that.”

Hoss and Joe looked over at Adam who was staring at his father. Both knew that Adam had already faced Langford Poole to protect the community and his father. They had to wonder what Adam was thinking although they knew he would never say anything. It got very quiet in the room until one-by-one, the sons excused themselves and went up to their beds.

Once they were gone and Ben was alone, his thoughts tormented him. Even though he eyed the brandy decanter, he decided against having a glass, although he was afraid to go to his bed knowing that some old dreams would assail him this night. Those dreams were when he saw Adam or Joe laying in the street with a red stain growing on their chest or Hoss laid out being prepared for burial. His sons were good and among the best there were, but he knew there were men who were better because there were always men who were better. A great fear was that he had taught his sons to fight for truth and justice, and one day, one of them might die in that cause, and he would feel responsible. Then he faced the question of whether he would do what the old rancher had done. He wondered if he could, and thinking about his sons up above resting in their beds, he knew he might one day have to answer that question and lose his soul or his heart.