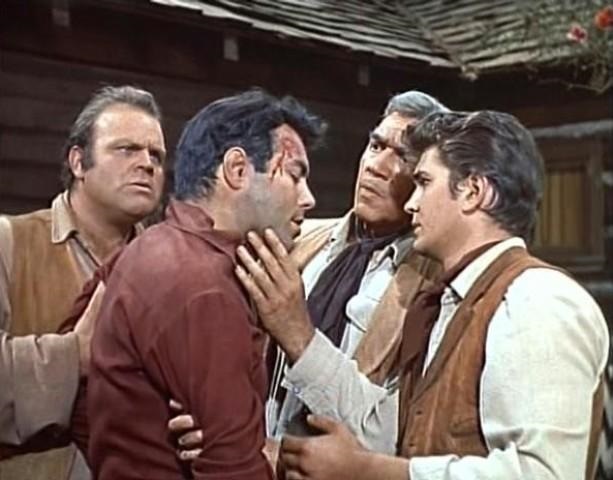 Summary:  A missing scene for the episode.

Adam stood at the small window behind his father’s desk and watched his family ride out of the yard. What he had said was certainly true: he was tired of being an invalid. He let the short curtain drop back into place and raised a hand to his head. He probed gently. There was a swelling the size of a small egg under his bandage and the wound was sore – but more from his father’s somewhat less than gentle ministrations than from the initial bang on the head. Even the headache that had dogged him all morning was finally starting to fade.

The sudden interruption made Adam start. “No, thank you, Hop Sing. If I drink any more coffee, I shall drown in it.”

Head on one side, the diminutive Chinese cook considered him, frowning. Even after all the years of their acquaintance, Hop Sing was still never quite sure when this particular Cartwright son was joking. “You feeling bad again, Mista Adam? You want cold pack for head?”

Adam smiled. He put a reassuring hand on the little cook’s shoulder and steered him back to his kitchen domain. “No, I’m not feeling too bad. In fact, I feel fine!” To his surprise, he found it was true. He had always possessed a rock-hard skull, inherited from his father. The blow to the head hadn’t really done any harm.

He looked at the book in his hand and fingered the elaborately tooled binding. It was a volume he had read before and a particular favourite, but right there and then, he didn’t feel like any more reading. There had to be something else he could do. He cast his eye over his father’s desk – piled somewhat randomly with paperwork. He could always tackle the ranch’s account books. His father hated the bookwork and was always behind – but Adam had no desire to fire that headache up all over again, not when it had just settled down to a distant and ever receding throb.

Ben had asked him to stay at the house – supposedly in case the escapees doubled back on their tracks. Adam didn’t envision that happening. He figured Sutton and Tyler would be a good long way from the Ponderosa by now and still riding hard – either that or they’d holed up somewhere nice and comfortable and were hiding out. Either way, they wouldn’t be coming back to bother Adam, and he saw no reason to waste his time waiting for them.

Cautiously, he unwound the rough and ready bandage from around his temples. His oversized, good-natured younger brother had the best will in the world, but his clumsy, blunt ended fingers were not exactly designed to apply neat medical dressings. Adam winced as he pulled the pad away from the soft, barely set scab. He hoped it wouldn’t start bleeding again.

He dressed in his good, dark coloured suit, the one with the finely striped pants and the full-skirted jacket, with a shirt of fine white linen underneath. With a bow of black silk tied at his throat and his best, silver trimmed hat sat squarely on his head he felt ready to go. He went out to the barn and saddled his favourite, bright sorrel horse. While his family was out criss-crossing the landscape searching for the miscreants, Adam was planning the evening ahead. A pleasant supper with his old friend, Roy Coffee, perhaps, watching the sun go down behind the mountains and hearing all the local gossip. Then several cold beers in the Bucket of Blood and a long, and no doubt expensive, evening with the lovely ladies at Miss Lucy’s establishment – the finest whorehouse this side of the Rockies. Adam swung into the saddle. There was a smile on his face as he headed for town.

With Gwynne's permission, the late Jenny Guttridge's stories are included in the Brand Library. Gwynne and JennyG were more than writers, they were best of friends. Because of this, you will find both Gwynne's and Jenny's stories listed on this page and comments for Jenny's stories will be routed to Gwynne.