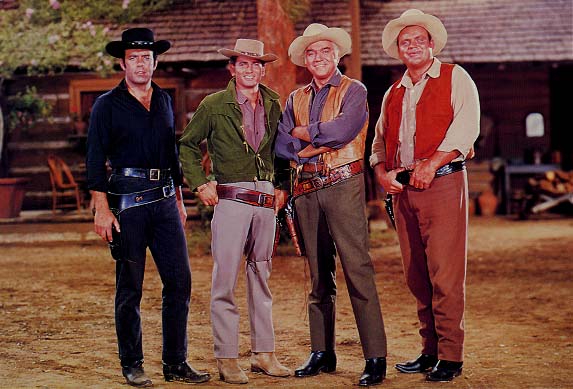 Summary:  We all know that thrift is a virtue, but the Cartwrights seem to take it to extremes, as the Giggly Sisters show.

Waste Not, Want Not

The bunkhouse was making one of its rather rare visits to the Ponderosa. It had shunned setting down at the right-hand side of the house and had instead plumped for locating itself next to the kitchen, where it could cause maximum disruption to any unsuspecting rider coming into the yard. Had this been the cause of the third Mrs Cartwright’s unfortunate squishing under the hooves of her horse? Unfortunately, dear reader, we will never know, for the scriptwriter neglected to include that rather vital scene into Marie, My Love, even if there was a dramatic shot of Joe falling off Cochise.

Ben gave a small nod of satisfaction: the ranch hands had been absent for far too long, causing the Cartwrights to do all manner of boring and rather inconsequential jobs around the ranch. Consequently, the Virginia City crime rate had soared, for Roy Coffee, the antediluvian sheriff, relied heavily on Ben and his sons to solve all crimes within a 10 mile radius. The Giggly Sisters had often wondered why Roy was retained as Sheriff, for he was an extremely elderly man, who moved at a snail’s pace, all the while chomping on his moustache in a reflective, but highly disconcerting manner. The sound engineers dreaded the episodes when Roy appeared, for his joints creaked alarmingly and gave them all kinds of bother and long nights in the editing suite.

“Hoss, go and check on the men, please,” Ben requested stentoriously. Buck had almost nodded off again but the sound of his master’s voice roused him from his slumbers, causing him to prance skittishly around the yard.

“I’m sure there’s something wrong with that horse’s legs,” the blonde observed. “They seem to be completely double-jointed.”

Joe sat back and watched as Buck did his equine interpretation of River Dance. Ben should have been used to this by now, but he detested the all-too frequent occasions when Buck acted up and longed once more for a nice spell doing the books. He hadn’t added up the trees for a couple of weeks now, so there would be plenty to keep him occupied.

“I hope that animal’s not got fleas!” Adam remarked.

Joe shot him a baleful glare. “If he has, we’ll just scrub him with that sulphur soap Hoss used in Bitter Water,” he said calmly, but with a certain edge to his voice and a flash of anger in his voice. For some reason, Adam didn’t like the little bear and shunned physical contact with him.

“I’m not a very tactile person,” he explained. The redhead tilted her head to one side and regarded him quizzically.

“You hugged the mad Irish female in My Brother’s Keeper,” she reminded Adam. “And put your arm around her waist!”

“I was under stress!” he protested. “I’d just shot Joe!” He paused for a split second, before adding “Accidentally!”

“On purpose!” Joe said, not quite sotto voce.

“PA!” Hoss was getting impatient now, having been totally ignored. “Them hands is back and so’s the log-cabin patchwork quilt!”

“I haven’t seen that since Showdown!” Adam reminisced.

“It was reappeared in the Keith’s bunkhouse in Bitter Water,” the blonde told him helpfully.

“Along with the scary Indian picture from Joe’s bedroom showing up in the saloon,” added the redhead. Even her children, usually sublimely impervious to things like that, had noticed. “And the horse statue in the living room appears in Boss Sladen’s office in The Boss.”

“It sometimes appears in my room, too,” Joe added.

“Nothing goes to waste around here,” Ben said. “We like to share with our neighbours. After all, we have so much more than most of them.”

“Like the chestnut horse in Amigo,” smirked the redhead. “The one that the posse were riding, that appeared in the next scene with the outlaws?”

“And the big white horse from The Gift,” said the blonde. “That also appeared in Song in the Dark and various others.” It had been a hideously ugly brute, she reflected.

“There’s also a liver chestnut with a thick bushy mane that appears in several eps, too,” added the redhead, who noticed every single horse for miles around, and could tell their sex at 50 paces. “And your team of chestnut carriage horses, that suddenly appear pulling the hired rig in MBK.”

“And how many times does the Ponderosa yard appear as a different place?” asked the blonde. “Thunder Man, Hanging Posse, Lonely House… I could go on and on, but I won’t.”

Ben looked rather ticked off. He had quite fancied the ranch house when it was done up for Hanging Posse. All those fringed curtains had quite appealed to him. It would save him building proper walls inside the house. Of course, there was the small matter of the amazing disappearing wall just inside the front door… This was clearly visible in external shots, but disappeared once you got into the house.

“I just hope they don’t try to recycle that royal-blue dress again,” the redhead murmured. It wasn’t particularly nice to start off with and had appeared in My Brother’s Keeper, Far, Far Better Thing and Woman of Fire. Adam gave her one of his less-than-wholehearted smiles, in which he showed his bottom teeth, but not his top set. The sisters were very intrigued by this and had spent hours staring in the mirror and contorting their faces in vain attempts to emulate him.

Ben settled into his fireside chair and Adam bagged the blue velvet chair. As ever, it was looking rather ratty and threadbare in patches. The sofa had been recovered several times, but no-one had ever thought to do the same for the blue chair.

“I wonder why they never get all the seats recovered in the same fabric?” the blonde asked, trying in vain to get comfortable on the sofa. It was hideously uncomfortable, which was why Ben and Adam avoided it like the plague.

Joe stood up and stretched, trying to get the kinks out of his back. He made a wild grab as his trousers tried to escape from the belt. “I just wish I had a pair of pants with belt loops on them!” he moaned. It was a source of constant aggrievement to him, for he was the only member of the family thus deprived. Then again, apart from this small matter, his trousers were just about perfect in all other aspects, especially the way they hugged his lean hips… (Joe was blissfully unaware that the said trousers were lamentably short in the leg, so that he often gave the impression of wearing Capri pants. The sisters decided not to enlighten him.)

“You’ve got belt loops on your brown suit,” the redhead reminded him. “We noticed them when you wore it in San Francisco.”

The blonde smiled at Ben in a disarming fashion. He had come to dread that look, for it always presaged an awkward question.

“Why did you keep your saddle in your bedroom in that episode?” she asked. “Wouldn’t it have been more convenient to leave it in the stable with the horse? I do find that having the saddle nearby makes it easier to tack the horse.”

“Tack?” Ben repeated. “I don’t tack my horse to the walls. What do you mean tack?”

“It’s what we call saddling your horse,” the redhead explained, kindly. “It involves putting on the bridle, as well as the saddle.” She gave him a big smile. “So why did you have the saddle in the bedroom?”

“Well, I… just in case it was stolen, I suppose,” Ben stuttered. He did so hate these awkward questions the sisters asked. And just when he thought they had changed the subject (tack? The Brits tacked their horses? How odd!) they repeated the question, so he still had to answer it. It really wasn’t fair. He had wondered why his saddle was there, but it was one of those things you just didn’t ask about. Like so many other things on the Ponderosa, he supposed.

Perhaps things had started with the tragic death of Marie: squashed to lifelessness right outside the front door. Nevertheless, Ben had never found it necessary to move. The Cartwrights were strong, stalwart men (even if Joe was an economy-sized version). They could cope with the daily, heartbreaking reminders. Then there was the mystery of Adam’s college education. Exactly which university had he graduated from? And how had he managed to complete a degree in architecture when the subject wasn’t even on the curriculum and other architects had to serve an apprenticeship?

And why had he allowed Adam to design the house? All right, he had only been a child, but still, it was deuced difficult living with bedrooms that never stayed still for more than one episode and as for that bit at the side of the stairs! It was far too narrow to perform any useful purpose and was a veritable dust trap. When it was there, of course, for the stairs appeared to be on castors and moved in and out from the wall with alarming regularity.

Mind you, at least all those highly convenient relatives and life-long friends never stayed too long. The downstairs bedroom was too noisy, being cunningly located between the entranceway, dining room and kitchen. But who were all those people and where did they go to once they left? Most of them never even appeared to send a thank-you letter. Of course, it was a well-established tradition on the show that the only postal communications they received generally signalled imminent disaster. Ben looked as his three sons and hoped that if any of them travelled away from the ranch they would write regularly. Adam had a strange, uneasy premonition and wriggled uneasily.

The blonde touched Ben’s arm gently. “And there’s another incongruity. Why on earth did the Bitter Water scriptwriter squander that marvellous opportunity to have a wonderful “Joe in the bath” scene?” That was indeed the question, one which fans had endlessly debated but no satisfactory conclusion was ever reached.

It was left to the redhead to have the final word. “You want to know the greatest incongruity? Four words, that’s all it takes. The Dreaded Jamie: why?”

And for once, no-one could think of a thing to say.

1 thought on “Waste Not, Want Not (by the Giggly Sisters)”