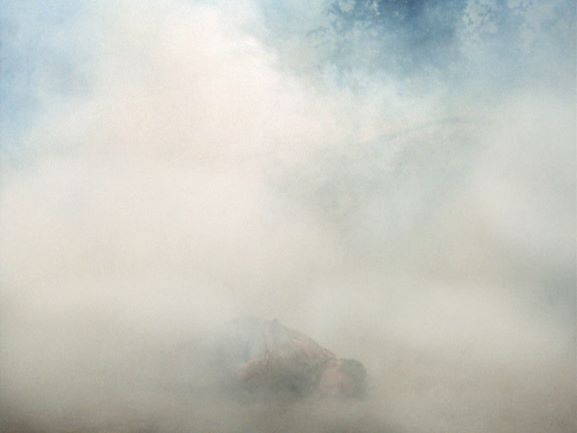 Summary: Hoss’ suspicions over a death leads him and Joe to an unexpected encounter. This is my entry for the October Chaps & Spurs and the Bonanza Spooktacular challenge for October 2019.

The words for this challenge were: mist, temperature, ghost, graveyard, spirit

The Mysterious Death of Amos Snead

Out of the mist, hung silent and still, the voice trembled. “I ain’t sure we should be doin’ this?”

Joe shot a black look at his older brother and grumbled, “It was your idea.”

The voice held a hint of exasperation when it replied, “I know it were my idea. I jest ain’t so sure now.”

In the shifting light, Joe appeared to glide toward him, making Hoss shiver.

His face now only inches from Hoss’, with a scowl pulled down over his glinting eyes, Joe jabbed a finger into his brother’s sizeable chest in time with his emphasized words. “You said Amos’s death weren’t coz of natural reasons. You said we should find out what happened, an’ you said we should come and look around.”

“Dagnabbit, I know!” Hoss hissed back, aggrieved to have his idea thrown back at him.

In any case, he couldn’t argue with Joe. It had been him who’d doubted Doc Martin’s diagnosis that Amos had died from a malfunctioning heart. Hoss just couldn’t believe it. Sturdier than the rock from which he made his living, the mine foreman looked built to last forever. When he’d been found that morning lying dead in the middle of the cemetery, it shocked everyone. No injuries were found anywhere on his body, but the dead man’s horrified, contorted face got the tongues wagging. It disturbed everyone who saw it. Doctor Martin’s assertion the muscle spasms, brought on by the pain of his failing heart, were responsible for the ghastly expression, didn’t stop the gossips. Nor did it stop Hoss wondering. Something didn’t sit right, and he wanted to get to the bottom of it.

Hoss saw only one way, which involved a trip out to the cemetery. Aware Joe couldn’t abide the place; Hoss needed to get him just the right side of mellow to be open to persuasion. He borrowed a leaf from his brother’s book of sneaky and started the evening off in the saloon. His strategy worked, but thirty minutes in, Hoss began to have serious doubts about his plan.

Discontent oozed from every pour. Ever since they’d entered the graveyard, a sense of unease had begun to seep in and spread within him.

“Why are we doing this, Hoss? It’s not like you thought much of the man.”

Joe was right. Known for driving his men hard and taking too many risks and shortcuts, Hoss never cottoned to Amos. To meet targets and gain a bonus, many accused him of knowingly sending miners into unsafe areas; causing unnecessary deaths of good men. Men laid to rest in graves all around them. The latest of these deaths was also the reason he’d been in the cemetery the night he died. Since it happened, the man’s relatives were loud in their accusations. Riled up and drunk, Amos had come up to pour his bile over the grave, making him an easy target. Yeah, the man hadn’t amounted to much. But Hoss still couldn’t condone or ignore murder.

“That ain’t the point-” he began, but Joe had vanished, swallowed by the writhing fog. “Joe?”

The shifting air, frozen into white clouds, appeared solid as if a wall had descended between him and his brother. His heart quickened and began to thump against his chest. The chill of the gravestone under them numbed his fingers.

Hoss crept after his younger brother. His skin prickled from the cold, or maybe something else? Around him, the world sunk into deep silence. The vaporous smog deadened any sound from Virginia City. Under his feet, even the snapping twigs were hushed. The temperature slumped. Hoss shuddered and pulled his coat tighter about him.

His thoughts stole longingly back to The Silver Dollar. How good would a glass of whiskey be right now? He could almost feel the warmth of the spirit in his throat.

The mist separated, allowing moonlight to shower the ground, turning dark markers into grotesque grey figures. Hoss swallowed, easing the sudden dryness. Ahead of him, he made out his brother. With hat in hand, Joe crouched down, searching the ground for something out of place. The moon threw its silver cloak over him, hiding Joe’s face in shadow and turning the silver streaks in his hair into shimmering ribbons. Hoss smirked; his mood lightened for a moment, wondering if his ‘baby’ brother had noticed those grey hairs yet.

Seeing him coming, Joe stood up, crammed his hat back on and put out his arms in a gesture of futility. “We ain’t gotta ghost of a chance of finding anything.”

Hoss flinched at Joe’s choice of words, but he agreed with them. Before he could say so, Joe sprang forward with a cry of triumph. Bending, he picked something up. “Hey, it’s Amos’s baton.”

Joe turned the short, stout stick in his hand. The heavy club epitomized the foreman. He’d carried the thing everywhere and used it to intimidate and bully.

Hoss drew a sharp breath and screwed his eyes into a squint. Behind Joe, the air lit with shimmering orbs. Myriads of colors danced within them, holding Hoss spellbound. His eyes widened, fascinated, and then shrunk back when they coalesced and took human shape. The ghoulish creatures rose and heaved across the ground. Dark, closed, dead faces, except for the spectral glow of their eyes, dominated the stark skeletal forms, from which burnt and torn clothing hung.  Worn boots scraped the ground, picks and shovels dragged from one hand, while the long bony fingers of the other clawed towards his younger brother.

Hoss opened his mouth to screech a warning, but his throat constricted and cut off the sound.

Oblivious, Joe scanned the ground in front of him. “Amos wasn’t found here. Why would he have dropped this so far from where he died? Do you think someone was chasing him?”

Hoss didn’t think it, he knew it. The creeping mass lurched forward, straight for his little brother who stood before them, holding the symbol of the dead man’s power and brutality. The stench of hatred and decay clogged his nostrils. Rage and revenge glowed in the smoldering, cadaverous sockets of their eyes.

“Put the baton down.”

“What’re you talking about? We’ve finally found a clue an’ you want me to leave it?”

Hoss recognized the stubborn note in his brother’s voice. Why did he have to pick now to get fired up and interested? Joe could be like a hound dog on a scent when he wanted. Sweat broke out on Hoss’ palms. His brother glared back, innocent and unaware terror loomed behind him. The talons grasped and inched closer, their macabre touch within a hair’s breadth of Joe’s back.

An explosion fired in Hoss’ chest. “Dadburnit! Put it down!”

Startled by his brother’s ferocity, Joe released the baton. Hoss watched the club leave his brother’s hand. It hit the ground with a muted thud, and the encroaching phantoms halted. Heart racing, Hoss stood transfixed. The specters wavered and drifted apart, subsumed into the haze surrounding them. When they finally faded, the breath he’d caught in his chest released.

Joe demanded, “What’s gotten into you?”

Dragging Joe along, Hoss didn’t ease his pace until they were on their horses and clear of the graveyard. He didn’t look back.

Hoss arrived back at the cemetery just before eleven o’clock the next morning, when Amos’s funeral would take place. Resolute, he marched to the spot where they’d left the baton, and soon found it again. His skin crawled, from the feel and weight of it in his hand. When he reached the open grave, he tossed the thing in with relief. Sparsely attended, the funeral didn’t last long, but one mourner looked on with more satisfaction than the others, seeing the coffin lowered and the hole filled.

Candy nudged Joe and tipped his head toward Hoss, a question in his blue eyes. Barely touching the beer in front of him, Hoss sat morose and withdrawn. He’d been like that all evening. Joe rolled up his eyebrows and shook his head in answer to the unspoken question. Out of sorts since their trip to the boneyard, his brother’s demeanor perplexed Joe. He didn’t think Hoss could be easily shaken, but it looked like the visit had him spooked.

Hoss rose and laid a hand on Joe’s shoulder. “I’ve got me an errand to run, be back in a little while.”

Concern rippled through Joe. Seeing the strange look in his brother’s eyes, he caught his arm. “You okay? D’ya want me to come with you?”

Reaching the cemetery, Hoss dismounted and tied off Chubb, going in alone on foot. Rightly, he didn’t know what brought him there, or what he expected to find, but something inside insisted he come.

He stood again beside the grave he’d seen filled only hours before and looked about. The graveyard lay quiet, serene even. No mist clung to it this night. The moon filled the sky, lighting the landscape with its cold warmth.

Hoss shook his head and snorted with derision at his foolishness. When he turned to go, the sudden chill made the fine hair on his neck stand up. Looking back, he saw them. No longer ghouls but men, standing together as one. Hoss couldn’t tear his eyes from the apparitions. The hammering of his heart pounded the blood in his ears. They gazed down at the grave of their murderer and the man upon whom they’d wreaked their retribution.

Hoss jumped at the ethereal voice. No lips moved on the visions before him, yet he heard it sharp and clear. “No one else will end up here because of him.”

United, ready to move on, and prepared to face their fates for the price they’d exacted they turned, to dissipate into the heavens.

Once again peace and stillness descended, the sounds from the town incongruous against the calm. Hoss dragged in a breath. His nerve shot, he’d seen enough. The big man turned and fled.

Some said Amos Snead didn’t die of a heart attack that night in Silver Terrace Cemetery. One man could have told them the truth, but he was staying silent like the graves that inhabited it.

Author Note:  The Silver Terrace Cemeteries in Virginia City are said to be haunted by men, women and children—most of whom died way too young. They were victims of accidents, disease, gunfights and mining fires.

I fell in love with westerns as a child. Growing up with Little House on the Prairie, re-runs of Bonanza, High Chaparral and Sunday afternoon films starring John Wayne, Audie Murphy and James Stewart. Returning to Bonanza recently, I discovered fanfiction and was hooked. I started writing my own just a year ago. I hope you enjoy my little stories and thank you for taking the time to read.

20 thoughts on “The Mysterious Death of Amos Snead (by Bakerj)”