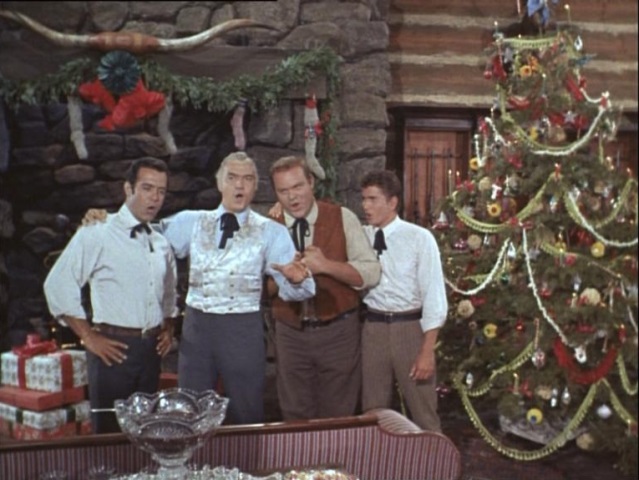 Summary:  A box of gifts arrives with a sender that intrigues the Cartwrights.

A Book: A Gift of Reading

Ben Cartwright was in town getting supplies for the upcoming winter when he ran into the postmaster.

“Hi Ben, how are things at the Ponderosa?”

“Hi Bill. Things are going well. How are things going for you?”

“Pretty good. You have a package waiting for you at the post office.”

“I need to stop at a few more places. I will picked it up,when I am done,” Ben replied.

“Merry Christmas to you and Happy New Year to you, too.”

“I will. You  too. Do you know who had sent the package?”

“Julia Bulette,” a shocked Ben repeated. He thought that she died from her injuries.

“That what was written on the package. From Julia Bulette to The Cartwright family and Hop Sing.”

Ben nodded, “I have to stop at a few places first. I will pick it up when I am done.”

As Ben was  finishing  his errands in town he kept wondering about did Julia Bulette fake her death?Or, was someone pretending to be her.

A couple of hours later Ben walked into the post office and walked up to the counter, “I have a package here.”

The clerk nodded her head. Wait here, “I  will go and get it. It may take a little bit.”

Ben thank her, and took out his pocket watch to check the time and noticed that it was almost three in the afternoon.

A few minutes later, the clerk returned carrying a huge package. She handed it to Ben, who thanked her again.

Ben ran into Bill again as he was walking down the post office steps.

“Sorry I was not here when you picked up your package, but I had to make a special delivery.”

“I am about to try out the new restaurant on Main Street, called Sarah’s Home cooking. Want to join me?”

“Maybe,another day. Hop Sing is going to cook us a Chinese meal.”

Bill nodded and replied, “Maybe I can stop by for a meal cooked by Hop Sing.”

“How about sometime after the new Year?”

“Sounds good, Hop Sing will be glad to see you.”

“I will glad to see him too. We need to play a rematch of checkers. I won one and he won one the last time we played. We were going to play a third game when something came up.”

“I will tell Hop Sing that you plan on having that rematch soon,” Ben said as he walked to his wagon.

A short time later Hoss and Adam Cartwright was feeding the hens, while Joe and Sing was playing a game of checkers, Joe as usual was cheating, but Hop Sing had the upper hand.

“Where is your brother Joe and Hop Sing?” Ben asked as he got down from the wagon.

“They are inside.  Playing a game of checkers.”

“And, as usual Joe is cheating, but last I knew Sing was still winning.”

Hoss  then noticed the package.”Who’s that for pa?”

“The package says it is from Julia Bulette.”

Adam walked over to where Ben and Hoss was standing. “I think we should be careful, when we opened the package. I heard about someone  who wrote a book claiming to be her and  that she faked her death.”

“Do you remember the book title?”

“Yes it’s called My Life Story: How I Had Fake My Death.”

“How do you know  that the author was not really Julia Bulette?”

“For one thing she claimed that she was only passing through Virginia City. No mention of owing a saloon.”

“I heard that the person was found out to be fake, after a nearly year long investigation,” Hoss replied.

A few minutes later Ben walked into the Ponderosa Ranch House carrying the package with Hoss and Adam following him.

Both Joe and Hop Sing stood up, when they heard the front door opened.

“Hop Sing and Joe, we all have received a package in the mail,” Ben said as he walked to the dinning room table.

“From who?” Joe asked, as he walked over to Ben.

“From Julia Bulette or someone who is claiming to be her.”

Hop Sing started to pick up the mess he and Joe made.

“Hop Sing can you please come here? Your name is on the package too,” Ben told him.

Since part of the mess is Joe’s he can help you later, Ben said, as he looked at Joe.

A few seconds later everyone including Hop Sing was sitting around the dinning room table as Ben carefully and slowly opened the package.

Taking off the lid  he sat it down on the floor besides him.

After a few minutes Ben was done passing out everything.All That was left was an envelope on the bottom of the package.He opened it and pulled out a sheet of paper and started to read

I know you are all very surprised and shocked to have received a package from me Ttinking that I died years ago after been attacked in Virginia City. I want to apologize for faking my death. I can’t tell you the reason, except I did so under the suggestion of a couple people that you all know very well. I hope you will not be too upset at them, but they were Doctor Martin and Sheriff Roy. To prevent my attacker from finishing off what he tried to do but to prevent him from hanging, they said my cause of death had nothing to do with the attack, but from a heart condition, that was never caught though health exams but he ended up hanging for a murder he actually did commit a few years later.  Ben, Please,don’t be to upset at them.

Adam stared at the wrapped book in front of him. It seemed everyone got a least one book.

Ben got a book on The History of Virginia City
Adam got a book from Charles Dickens, A Tale of Two Cities that was a first edition
Hoss got one animal care
Joe got a detective novel
And Hop Sing got a cookbook, written in Chinese.

Adam opened his book to reveal that it was autographed by Charles Dickens, and saw a note from Julia.

Adam, I know you don’t believe that I actually survived my injures after I was attacked ,and that I am some sort of fake. I don’t blame you, but I am really Julia Bulette. I can prove it, open the book to page sixty. You will find a recent picture of me.

Adam flipped though the pages of the book,until he reached page sixty and on the page was a lady who Adam had to admit looking exactly like Julia Bulette, but he still had his doubt; mainly because  of that other woman who had claimed to be her, but turned out to be a fake. Putting the book down, he picked up the note again and continued reading.

If you still not sure, I have written down somethings that only I, Julia Bulette, would know.

Adam started to believe after he continued reading, but he wondered why admit now that she had faked her death.

After everyone had opened all their gifts, Hop Sing stood up and started cleaning up. But Ben hold up his hand and said, “We will all help you, right?”  He asked, looking at his three sons, who nodded.

“Right,” they all replied together as they started to pick up the discarded wrapping paper. A few minutes later everything was cleared from the table and everyone was sitting by the fire reading their new books, while drinking hot chocolate with homemade marshmallows.

Adam could not believe that he actually got a first edition of A Tale of Two Cities. It was one of his favorite books by Charles Dickens. He had left his old copy in a motel in San Francisco when he was visiting some of Hop Sing’s family with Hop Sing. He was meaning to buy another copy, but had a hard time finding one.  But now he had a first edition copy that was autographed by the author.  He  gave a silent thanks to both Charles Dickens and to Julia Bulette for getting him the book.

As everyone was reading their new books, a loud knocking sound could be heard. Putting down his new cookbook, Hop Sing rose from his seat and went to answer the door. He opened the door to reveal Julia Bulette, standing next to her were both Sheriff Roy Coffee and Doctor Martin, “Hi can we come in?”

Hop Sing nodded and opened the door wider to let everyone in. He then went to his kitchen.

Adam looked up from his book new and any doubt he had about the woman claiming to be a Julia Bulette being a the real one disappeared when he saw the woman standing in front of him.  He sat down his book and rose from his seat.  “Julia, Thank you for the book.”

Julia nodded, “You are very welcome. We are here to see your pa.”

“When did you arrived in Virginia City?”

“A couple of days ago, but I spent most of the time in my boarding house room.”

Adam nodded and went back to read his book. He barely paid attention to the discussion between Julia Bulette, Sheriff Roy Coffee, Doctor Martin, and Ben Cartwright. A short time later Ben shook everyone’s hand and invited them to stay for a Chinese meal, cooked by Hop Sing. They all thanked him for the offer, but they have to be on their way but, maybe another time soon.

After everyone had left, Ben turn to face Adam, “How is A Tale of Two Cities?”

“Wonderful, in my opinion it is Charles Dickens best book.”

The Virginia City Literary Society occasionally sponsors literary exercises and challenges of a collaborative nature which result in stories or poems for publication. Works involving multiple authors will be published by the Society under the name "VCLS" and reference the individual authors in the story notes.

4 thoughts on “A Book: A Gift of Reading (by fanofoldTVshows)”